The International Organization of Supreme Audit Institutions (INTOSAI) is the professional organization of supreme audit institutions (SAI) in countries that belong to the United Nations or its specialized agencies. INTOSAI was founded in 1953 and has grown from the original 34 countries to a membership of over 192 SAIs. As the internationally recognized leader in public sector auditing, INTOSAI issues international guidelines for financial management and other areas, develops related methodologies, provides training, and promotes the exchange of information among members. One way by which INTOSAI promotes the exchange of ideas and experiences between SAIs around the world is through its triennial congress called the International Congress of Supreme Audit Institutions (INCOSAI).

Within INTOSAI there are seven regional organizations of supreme audit institutions: Latin American and Caribbean (OLACEFS), Caribbean (CAROSAI), Europe (EUROSAI), Africa (AFROSAI), Arabic countries (ARABOSAI), Asia (ASOSAI) and the South Pacific (PASAI). Not all SAIs are members of a regional organization. Each regional group organizes seminars, congresses, or other activities for the SAIs in that region and has its own headquarters.

INTOSAI also has a number of committees on special subjects, such as auditing standards, as well as a number of working groups dedicated to innovative subjects like environmental auditing, and task forces dealing with issues of significant interest of members. INTOSAI works in five official languages: Arabic, English, French, German and Spanish.

During the 14th INCOSAI meeting held in Washington, D.C. in October 1992 the INTOSAI membership indicated a strong interest in the roles and activities of Supreme Audit Institutions in issues of environmental auditing. The formation of a Working Group on Environmental Auditing (WGEA) was initiated and approved by the Congress. The INTOSAI Governing Board then took the steps to constitute the Working Group under the chairmanship of the Netherlands Court of Audit, which in turn prepared terms of reference for the WGEA. The terms of reference, which constitute the guidelines for the Working Group, were approved by the INTOSAI Governing Board in Vienna in May, 1993. The Working Group aims to improve the use of audit mandate and audit instruments in the field of environmental protection policies, by both members of the Working Group and non-member Supreme Audit Institutions (SAIs).

The WGEA started out with 12 countries and has since grown to a membership of 77, making it the largest INTOSAI working group. By the end of 2000 the INTOSAI regions ACAG/PASAI, AFROSAI, ARABOSAI, ASOSAI, EUROSAI and OLACEFS have each established a Regional Working Group on Environmental Auditing (RWGEA). English is the official language of the Working Group on Environmental Auditing.

The Working Group on Environmental Auditing (WGEA) is one of many committees and working groups that are addressing a variety of audit topics and issues under the auspices of the International Organization of Supreme Audit Institutions (INTOSAI).

Six of the seven geographic regions of INTOSAI have established a Regional Working Group on Environmental Auditing (RWGEA) (see the world map below). The WGEA collaborates with these six groups to improve the use of audit mandates and audit instruments in the field of environmental protection policies. The WGEA also collaborates extensively with INTOSAI’s training arm — the INTOSAI Development Initiative (IDI) — to prepare and conduct a course on environmental auditing.

As of 1 January 2022, Mr Sami Yläoutinen has been appointed as the Auditor General of the National Audit Office of Finland and with this, he has taken on the role of Chair of the INTOSAI Working Group… 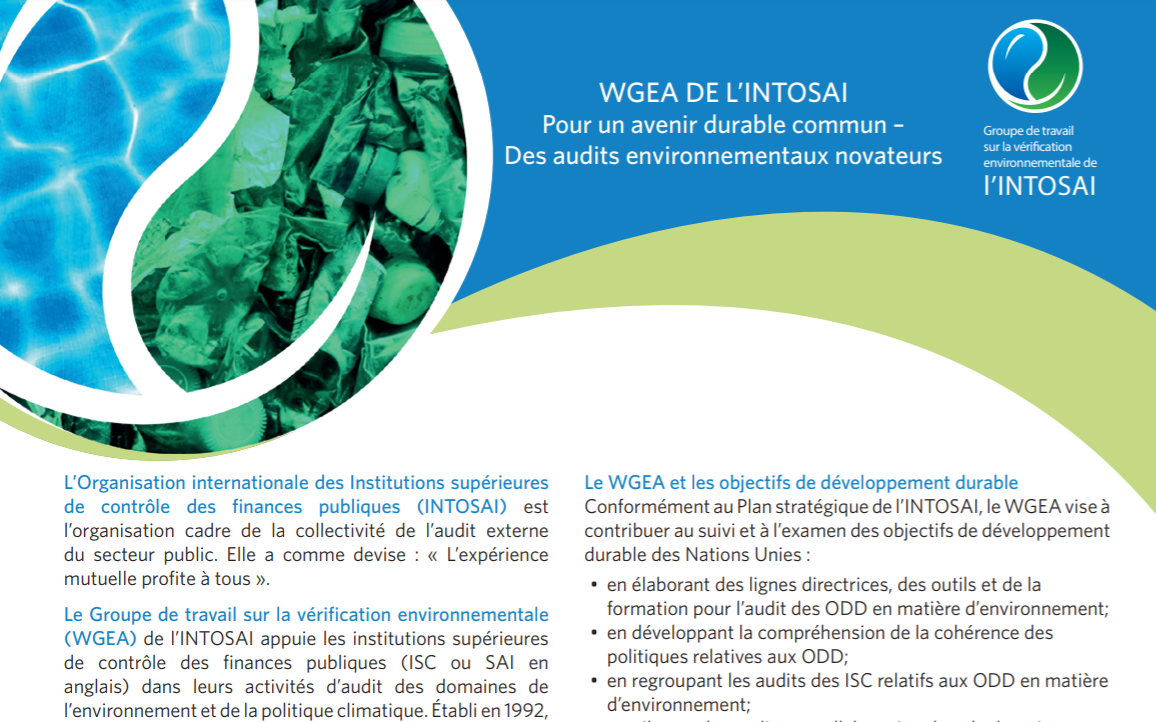 The COP26 Bulletin is now available in Arabic, French and Spanish

In the context of COP26, the INTOSAI WGEA prepared a bulletin in collaboration with the U.S. Government Accountability Office, which summarizes the work of the WGEA and SAIs on climate. The aim of the…

The updates of the "News and Events", "Greenlines", and "What's New on the Site" can now automatically be sent to your e-mail. To get the updates automatically, you should subscribe to a feed and choose what content you want to receive. After that you will be sent an e-mail with a confirmation link. Please visit the link and accept your subscription.

Your subscription is success